The surgeon who led what’s being called the most extensive full face transplant operation ever done says the patient, 41-year-old Patrick Hardison, is recovering well.

The surgery took place in August at NYU Langone Medical Center in New York City but it wasn’t announced publicly until Monday. Hardison, a former volunteer firefighter from Senatobia, Mississippi, was severely burned fighting a fire in 2001 and had his entire face and scalp replaced with that of a donor.

“This is a large leap forward,” Dr. Eduardo Rodriguez, chair of the Wyss Department of Plastic Surgery at NYU Langone, told CBS News.

A number of other face transplant operations have succeeded over the last decade, but Rodriguez said none involved replacing as much tissue as this one. He said the only comparable attempt, several years ago, ended with the patient’s death.

In an interview with CBS News, Rodriguez said it was important to him that Hardison had a “realistic” understanding of the risks before deciding to go through with the surgery, which “could give you a normal face – or could kill you.”

In addition to his physical disfigurement, Hardison lived with persistent pain and near blindness. His face and scalp were covered with scar tissue, and because his eyelids had burned and he couldn’t blink, doctors were forced to sew skin grafts nearly shut to protect his eyes. The face transplant gave him functioning eyelids that allow him to blink and see again. 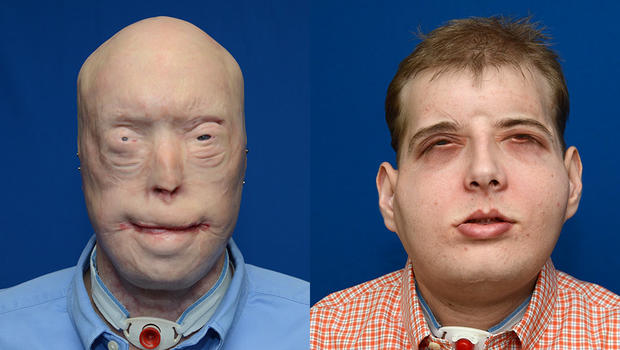 Now, more than 90 days into his post-surgical recovery, “He’s doing so well,” Rodriguez said. Hardison has not experienced rejection, a major risk after transplant surgery. He continues to undergo physical therapy and wait for the rest of the swelling to subside.

Rodriguez is optimistic that this success will pave the way for more full face transplants in the future. “This opens the field to more dramatic opportunities. And it opens the field for people that are severely disfigured. It’s important that we have the appropriate level of care for our wounded soldiers, our first responders, and civilians with severe facial deformities,” he said.